Sharia Week :: Anti-Sharia rallies are a waste of time!

On June 10, 2017, ACT for America is organizing  anti-Sharia rallies in 23 Cities across America. Given that Muslims have not asked for it, it is a waste of time. We are offering a symposium to clarify once for all – all the doubts, fears and question  have about Sharia. This week a series of articles on Sharia and declarations will be made on this website; www.CenterforPluralism.com.  We are offering solutions and in the wake of that these rallies are a waste of time. I will be contacting Brigitte this week.
ACT for America is hell bent on pitting one American against the other creating chaos and confusion, where as CFP (Center for Pluralism) is committed to building  a cohesive America where no American has to live in  or tension.
Included below are the Press Release and the Action Plan
We hope to organize a press conference on Wednesday June 7 at 6:00 PM
Please note the date and time, and the place will be announced right here
http://centerforpluralism.com/anti-sharia-rallies-are-a-waste-of-time-mike-ghouse/ 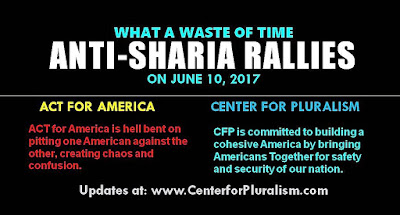 Washington, DC, June 5, 2017 — Brigitte Gabrielle, a frequent combatant with Mike Ghouse on the Sean Hannity show at Fox News is organizing nationwide Anti-Sharia rallies on Saturday June 10,2017.  Her organization, ACT for America is hell bent on pitting one American against the other, whereas the Center for Pluralism is committed to bring Americans together under one flag as one nation under God for the safety and security of Americans, all Americans.
No Americans needs to be afraid of the other, we are a free people and we will fight with the negative forces to keep our land free from fears and ill-will.
Mike Ghouse, president of the Center for Pluralism said, “I urge Ms. Gabriele to consider withdrawing this gratuitous act and join us in a civilized conversation on Sharia in a symposium we are planning. Let’s stay focused on peace and prosperity and not flame conflicts and confusion.”
First, let’s get the position of American Muslims out of the way. As Muslims, they uphold, protect, defend and celebrate the values enshrined in our constitution. Their faith reinforces the idea of one nation with liberty and justice for all.
Secondly, they and their institutions are not seeking or asking for the type of Sharia that ACT for America is imagining, cooking and opposing.
Lastly, the Center for Pluralism is committed to bring knowledge to Americans to allay their fears about Sharia. A series of articles will be published in the newspapers, or at least our website www.CenterforPluralism.com and Dr. Ghouse will be available to discuss Sharia.
# # #

On Saturday, June 10 2017 – Brigitte Gabriele’s ACT for America is organizing 23 Anti-Sharia rallies across America[i](Link) . What are we going to do about it? I am pleased to offer what we have done in the past events like this, and our action plan.
We have a choice to exhaust our vocabulary by throwing epithets like “right wingers, Islamophobes, Neocons, enemies of Islam…..” or follow the non-violent path laid out by  (pbuh).
Mother Teresa once reflected, “If you want to make peace with your enemies go talk with them.” It is as simple as that and it has greater chances of working out than cursing them. Non-Violence works!
Pastor Jones wanted to burn 2998 copies of Quran – we stepped in and pulled the entire county to work with us – We levied no condemnation against Pastor Jones but acknowledged his right to free speech. It is one of the successful stories of Muslims engagements with fellow Americans to bring a positive change. Funds permitting, and encouraged by the Department of State, we are considering making a documentary in resolving conflicts,   respecting freedom of speech and honoring what is sacred to people. It will be another feather in Muslims cap.  at: http://quranburningpastorterryjones.blogspot.com/
Jeffress desecrated Islam, Prophet and Quran and called, “Quran is a false book written by a false prophet “creating a mess in Dallas, Texas. My approach was, “Pastor Jeffress, I am not blaming you for what you said, but I am asking you to check the veracity of the source of information you have about Quran and Islam. You probably have read the deliberately mistranslated Quran, I am pleased to offer a good translation and we can discuss it right here in your church. We owe the truth to our congregations. We responded kindly and it ended up in a Quran Conference that successfully changed the minds of fellow Americans towards Islam. This special site has full of videos, stories and events – www.Quraanconference.com
We also dealt with 9/11 Ground Zero Mosque controversy; I was the sole defender in its first week against Pamela Geller and Sean Hannity. If Imam Feisal had entered the scene earlier the situation would have been different.   Much of which is chronicled in this special purpose blog – http://groundzeromosque.blogspot.com/
Peter King Hearings and other issues are chronicled in full blogs dedicated to the topics.
In October 2015 armed protests were planned in front of 15 mosques. Muslim organizations did not want to deal with it, I challenged them and they accepted to keep the mosques open and offer water and snacks to the protestors. This was an opportunity for Muslims to present themselves as to who they were – a hospitable people and not what Fox News portrays them to be. Thanks to Dahlia Mogahed for seconding the proposal. We wrote a press release and published in 80 newspapers – the protestors backed off.
Now, I want to make a similar effort and it will take employing a lot of time, resources and funding in the next few days.
Countering Anti-Sharia demonstrations.
Let’s handle this situation in the most civil manner while acknowledging and honoring free speech by ACT for America group.
Click this link and donate:
https://www.paypal.me/AmericansTogether
Mike Ghouse
Center for Pluralism
www.CenterforPluralism.com
Washington, DC 20002
(214) 325-1916
REFERENCES:
ACT for America Site – http://www.actforamerica.org/rally
Rallies to be held in 23 Cities  http://imagine2050.newcomm.org/2017/05/22/anti-muslim-march-against-sharia-planned./
Posted by Mike Ghouse at 11:05 AM